Bobby sawed a broomstick half way across and hid it under the wrestling ring. At the right moment, he was going to pull it out and hit his opponent with it.

Bobby’s a wrestler in the indy circuit. He didn’t want to hurt the guy, but he figured if he hit him with a broom and the broomstick would break, then the small crowd of young men that came to watch would cheer.

Bobby pulled the guy over the ropes. He got out the broomstick. He swung at the guy’s back.

Bobby took the broom and broke it over his knee. Bobby figured that he accidently hit the guy with the whole broom, rather than the part he had sawed.

“It looked like he was caned,” Bobby said later.

Professional wrestlers are sport entertainers. In their 20’ by 20’ stage, they move their bodies in tandem and opposition to tell a fantastic story of heroes and villains and good versus evil.

In their dramatic violence, the wrestlers get hurt.

Call it the Wrestler’s Paradox: dramatize violence, but avoid injury to yourself and others.

To discover how wrestlers contend with the Wrestler’s Paradox, sociologist R. Tyson Smith (published in 2008, Qualitative Sociology) dove into the pro wrestling circuit called “the indies.” Indies, short for “independent,” are local, low-budget affairs held in schools and community centers, far from the flash and cash of the WWE. It’s less Hulk Hogan and more Mickey Rourke in The Wrestler. The best known wrestlers are unknown outside of the tight-knit indy community. The audiences they attract are young men. 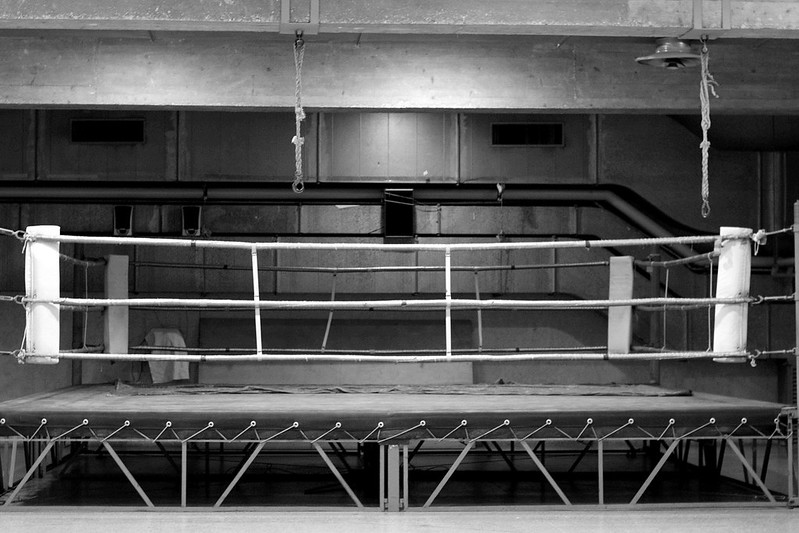 Smith spent three years in a school designed to turn young men into professional wrestlers. In these schools they learn the ropes and choose their character: heroes (“babyfaces”) or villains (“heels”). One of the first school lessons are how to relax when a shirtless and snarling muscle-bound man hurtles at you from 20 feet away.

Wrestling schools, usually founded by famous and erstwhile pro wrestlers, are informally run and hard to find. Most students discover schools from folks they know and, of course, through the internet. You can join for two hundred bucks a month and quit with no fanfare. After your first year there are no dues to pay other than helping out — set up the ring, take tickets at the shows, and clean up after.

To get to know the students, Smith attended wrestling shows and practices. He interviewed wrestlers and hung out with them in gyms, bars, and road trips. Almost all the students he interviewed were young, white, working class men of average build. A few had a college degree, but most never went past high school.

A performance can pay anywhere from 25 to 75 dollars. Most don’t pay at all. “After factoring in costs for meals and travel,” Smith writes, “a mid-level indy performer comes out about even, if not at a loss.” So the wrestlers worked day jobs and hoped for the big time. After a few years, most realize they are never going to the big time. “Vets” of the circuit have been around only five years or more.

Work conditions can be precarious. Some indies feature “extreme” wrestling, with heavy furniture and sharp objects as props. Some wrestlers will jump from a tall ladder into the ring. As mandated by the government, a doctor checks out the wrestlers before they perform and stays backstage during the show. But there are no labor contracts to speak of and no health care plans.

Guys mostly get hurt because of mistakes and miscommunications – like hitting an opponent with the wrong part of the broom or swinging an arm at the wrong time.

“I shattered my nose in a Battle Royal,” said Johnny, an indy wrestler. In this part of the performance, Johnny expected his opponent to swing a forearm, but they didn’t sync. “Turned around and he clocked me right in the nose, completely shattered my nose. I had to get reconstructive nose surgery….”

“The bone’s sticking into my eyeball,” he added.

The rowdy crowd of young men came for the story of fantastic violence but the performers spend most of their time trying not to get hurt. Like vaccination against communicable diseases, it’s a public health problem where one careless guy can cause injuries to many.

To protect the group – and themselves – they created social norms to avoid injury. Serious transgressions of the no-hurt norm are met with anger and disgust. Vets will admonish careless newbies. Too-often careless newbies are not encouraged to stick around.

Most people think of pain as a medical condition. Nerve damage tells the brain that there’s an unpleasant problem. But if we can reinterpret the pain as not a big deal, or even as pleasurable, it can change how we think of ourselves.

If others notice that we wear our pain as a badge of honor, it can change how others think of us.

Within their tight knit circle, talking about the pain is an opportunity for ridicule: “You still bitchin’ about your neck?,” and the like. At the same time, they are sensitive to public criticism that wrestling is “fake.” As a consequence, the wrestlers go in hard for the authenticity of their hurt.

Expose the injury. Hide the pain. Gain the respect of your peers.

Sometimes they try to hurt each other.

On rare occasion a real fight breaks out, what wrestlers call a “shoot.”

“Premeditated shoots are frightening,” Smith writes. Wrestlers are trained to relax when fighting, and when a guy stiff arms his opponent without warning, the opponent is left “virtually defenseless.”

Wrestlers spend all that time avoiding injury – why would they then intentionally hurt a fellow wrestler?

There are a few reasons: Perhaps they don’t like you, or they think you need to be taken down a notch, or they’re testing you, to “see if you’re a pansy or not.”

Dominance, hierarchy, and putting a guy in his place: This is a hidden currency of wrestling.

Most of the time, though, the wrestlers look out for one another. Yes, sometimes a fight breaks out, and sometimes its personal, but usually it’s from an accident in a heated moment.

In that sweaty hotbed of violence and risk, a solidarity rules. Solidarity does not fully solve the Wrestler’s Paradox, but it makes it more likely that once the ring is cleared and the crowd disperses, the wrestlers can drive themselves home.

Bobby sawed a broomstick… (137). At school they learn how to get a strong reaction, a “pop,” from the crowd. Bobby must have hoped for a pop from his broomstick idea.

Wrestler’s Paradox is my term for what Smith studied.

One of the first school lessons are how to relax… (139). Previous martial arts experience can help with feeling relaxed while fighting.

Almost all the students… Smith writes, “Of the twenty participants, most are white, working-class men who range in age from eighteen to thirty-five, have a high school education, and work part-time in low-level service jobs in a metropolitan area. Five have attained a B.A. at a local college. Contrary to the stereotype of pro wrestlers as massive strongmen, most are of average body size, weighing between 160–200 pounds and standing between 5′8″ and 6′2″ in height.” (131)

View all posts by jdubrow2000